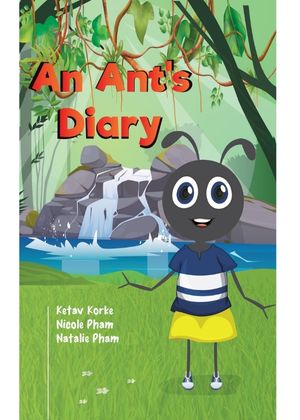 Cascade is just a little ant trying to figure out her way in the world when suddenly a calamity strikes and the whole ant population is afraid of the war to come.

Without a queen everything is distraught.

Can Cascade rescue her kingdom along with her two best friends? -while her grandparents are always trying to find her a love match, and her enemy continuously trying to sabotage her plans to overthrow Cascade.

READ TO FIND OUT MORE…

Ketav, Natalie and Nicole are 11 years old as of 2022 and are very good friends studying in the 6th grade at Itliong Vera Cruz Middle School. They have worked on many books together. The three of them spent the whole of fifth grade year together working on the ‘An Ant’s Diary Series’ as it was so much fun to do. They have decided to make more than just one book on Cascade.

Ketav is great storyteller. He has been creating and narrating stories since he was six. He recently started his writing career in 4th grade. He has written many short stories but never published them.

Ketav loves all types of animals and wants to become a zoologist when he grows up. He loves going on vacations and meeting his cousins in India. His whole family is from India. He loves collecting cards and researching books. He loves swimming, playing badminton and basketball. Ketav has a dog named Eva who is a goldendoodle. He one day wants to go to Tokyo, Japan to sightsee as it has always fascinated him. He also wants to visit various Wild life Sanctuaries around the world.

Natalie Pham was born in 2011 and has survived the covid-19 pandemic. She has a twin named Nicole Pham. Together they have worked to find out about Cascade’s diary, with a friend named Ketav Korke.

She first started writing in kindergarten! She is now ready to get started on a career of writing and finding more Cascade diaries. This is her first published novel. Her hobbies are playing with all kinds of entertainment, crafting, reading, licking on ice cream, eating cookies-n-cream ice cream cake, drawing, acting, writing, and going to Great America, an amusement park. She is working on another series called Best Friends, as well. You can find her at the library with piles and piles of books. She’s always on adventures, and hopes you can be led in on the magicalness of writing. She has actually written over 100 books, they’re just not published yet! Natalie Pham has many dreams and she’s ready to achieve them.

Nicole Pham resides in the USA, California, with an awesome family. Both Nicole and Natalie are of Vietnamese origin.

Nicole Pham has written many books, including ‘Little Big Snake Adventures’ and ‘Stickland Island’ graphic novels. She first started her writing career in kindergarten, with her twin sister Natalie Pham. She wrote many stories and books, but has never finished them or published them until now. (She just didn’t have a publisher in kindergarten? I mean, who would?). Her first story ever in kindergarten, was a comic about aliens. It was called ‘The Zag World Aliens’. She made a bunch of those stories, and to this day, she writes and keeps her mind in focus from short comics to long novels. She also writes novels about true events and loss. But she never lets a sad story end as a sad story. She lives in happy ends, but still tells stories about many friends who came and went.

Nicole Pham enjoys, writing, collecting pokemon cards, biking, and hiking! Her very excellent pal, Ketav Korke , has helped her in many situations. They met in third grade. Nicole Pham also enjoys going to theme parks like Disney land and Great America. Nicole Pham loves hotels and heights and also loves airports and exploring. She hopes to one day have as pet a Siberian Husky, a popular dog breed. Nicole Pham loves food all around the world - from slippery Spaghettis to rock hard pastries, and may one day try the hardest food in the world, a Japanese dish. Nicole does not enjoy seafood, and claims herself as an animal rights activist (almost!). Nicole’s other hobbies include collecting pokemon cards, vacation, and toys! She reads and writes and continues gaming her way through anything! Every day, she reads and writes a lot. But the joy won’t end yet. Nicole Pham’s life is getting interesting!