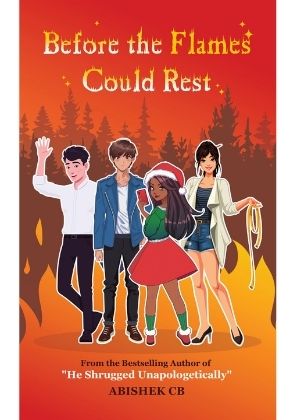 Before the Flames Could Rest

It’s storytime, for children and their “grown-up!” I have got a tale for you. This is the story of four teens who are in their fourteens - in the unknown reaches of time. You can count on an awe-inspiring fantasy world that is beyond possible, the grace of the characters living in their unique way, and the newest adventure paths cross often. With new companions everywhere and new encounters every step of the way… Will our smartest heroes overcome the terrifying hurdles? Do our four heroes have any prophecy to complete? More magical battles are happening don’t miss any of them.

Now, you might be wondering: what exactly will our four heroes do? The one thing that unites this fantasy novel is, of course, the tantalizing buildup of suspense. Suspense isn’t a thing -  it’s a feeling that encompasses mystery, thriller, and even some blood magic. “Before the Flames Could Rest” will have you on the edge of your seat, heart-pounding, blood racing… all that adrenaline-y stuff.

Also, this narrative is told by an uncle who is a cool dude who loves his niece and nephew like a parent, relates to you as a brother and sister, and indulges you – a unique relationship! Along with his Niece (real) as Nephew (reel). If you want to be a "cool uncle," just read this book and share it with your nieces and nephews to earn the title.

Psst! "EYE-GRABBING GRAPHICS" are included in this book.

Abishek CB is the co-owner of CVR Green Grocer- Chengalpattu. Abishek C B is the living example of the phrase, ‘Never Judge a Book by its Cover.’ A memoir at 23 is not everyone's cup of tea, but young and top author Abishek CB did it. Having faced criticisms and inappropriate statements from people at the age of 23, he is confident and determined to excel in the field of writing and make a mark of his own. This Chennai lad is the son of Balakumar CR and Vijayalakshmi B. He has sold hundreds of copies of the book that is based on his own life. As a Reader in Government School, he supports underprivileged children and counsels them for their betterment by conducting several educational programs. He is passionate about working for the cause of the poor in Tamil Nadu by organizing different types of fundraising activities. He often had a thought of why Indian black and brown children not seeing themselves reflected in the books and characters which impacted him, and he loved so dearly all kids which have been inspired to create art and meaningful stories so that underrepresented children can see themselves in books. He is excited about the overlap between art and writing. As an author, he heroes those who feel stuck and powerless and show them how to regain their self-belief and motivation. Also, Abishek creates art and creative tales to inspire you to become the artist you were born to be.